This charming exhibit on historic Cape Cod is at Falmouth’s Museums on the Green will be running through October 11th. It is located in the 1730 Conant House at 65 Palmer Avenue, just 2 door away from the Palmer House Inn. 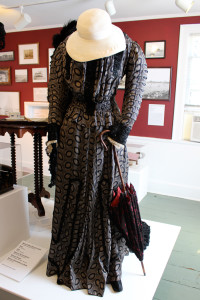 Two of the values that people of the Victorian era held dear were respectability and propriety. The rules of behavior and dress were strictly enforced by society. Getting dressed in the late nineteenth century had its own strict ritual. The care with which middle and upper class women dressed is an indication of how much importance was placed on one’s appearance. The fashion of the day was in an intricately coded language, as I guess it always has been and will continue to be. Fabrics, jewelry, embellishments and styles would indicate a persons social standing, economic situation and intellectual leanings. Victorian woman delighted in taking a bit of fabric and adding lace, beading or ruffling. 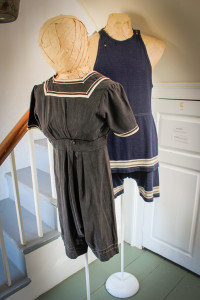 Most of the clothing in the exhibit are the fancier items that were saved and cared for, in other words their Sunday best. Sailing captains’ wives and other well-to-do Falmouth residents were known to dress formally. While the working class Falmouth residents such as the fishermen, crafts people and farmers’ clothing was not preserved. In those days of home weaving and hand sewing, people used their clothing until it wore out, at which time it was probably turned into rags. Woolen items were cut into strips and braided to make rugs.  Other fabrics were sewn into quilts. The items in the exhibit, show the clothing that people cherished and saved.

For women at the turn of the twentieth century, getting dressed was a lengthy process. It was not unusual for a woman to wear fifteen pounds of undergarments alone. They were put on layer upon layer. The clothing was uncomfortable, hot and confining. There is one photo at the exhibit that shows two women in a canoe. They are wearing wide-brimmed hats, full length belted skirts, high neck blouses with ties and long buttoned sleeves. It does not show their feet but if they were wearing button-up shoes like the ones in the nearby case, they would have been goners if the canoe had capsized. 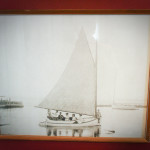 There is another photo of a spritsail sailboat. This is a rig design that is unique to Falmouth and Eel Pond in the Woods Hole section of town. The boat was designed with the mast located in the bow, with one large sail. As the boat approached the fixed bridge, the crew would step the mast. Which means that it is lifted from its mount and placed horizontally in the boat. The boat passed under the bridge and the crew would put the mast back into place. When a draw bridge was built over the inlet to Eel Pond this type of boat was no longer needed. However, upon occasion a spritsail can be seen in Falmouth waters. 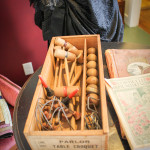 During the late nineteenth century, Cape Cod was in transition. For generations whaling and fishing had been the primary source of income. When the fisheries collapsed and whaling became no longer profitable, people started leaving the area in order to find work. At that same time, wealthy Bostonians and New Yorkers started coming to the area to vacation. They liked the fresh air and the beautiful beaches. The resorts and hotels soon followed. During the early part of the twentieth century, the rail lines arrived and brought more tourists. Thus the Victorian Age came to Falmouth. 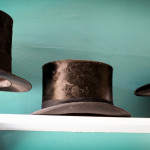 Falmouth Museums on the Green

Falmouth Museums on the Green are located in the Historic District and just a few steps from the Palmer House Inn.

While all of our rooms have their own individual charm with beautiful antiques and historic Cape Cod items, we recommend the Harriet Beecher Stowe room, the Theodore Roosevelt room or the Emily Dickinson room. These rooms feature comfortable king beds, fireplaces, jetted tubs and a relaxing stay before and after your day.