Our museums  are just a few steps from our inn’s front door.

They overlook the picturesque Village Green which was designed in 1749 and was originally used as common land for grazing. Members of the Colonial militia practiced on the green before going to serve in the American Revolutionary War. The stately homes built by the towns sea captains still surround the  area. 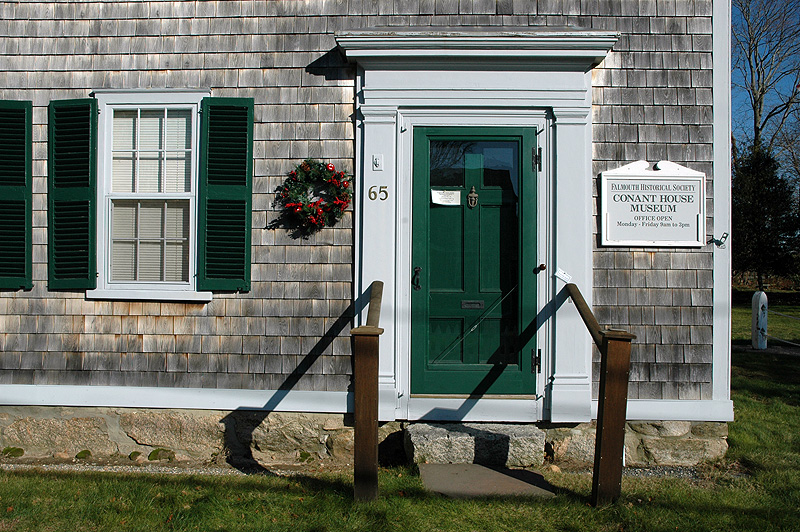 One of the museums is the impeccably restored, Federal style Julia Wood House which is filled with period furnishings, fine arts and textiles. It was built in 1790 for Dr. Francis Wicks, a pioneer in the use of smallpox vaccines. Wicks learned the medical profession during the Revolutionary War while serving in the Colonial Army.After the war he returned home to Falmouth and opened his medical practice in his home. Meals were prepared in the Colonial kitchen with its large hearth by indentured servants or slaves.which was customary in those days. The family ate in the large, rectangular dining room where President Grover Cleveland’s blue and white English Stafford china is on display in the built-in cupboard. The small formal parlor is filled with period furnishings including a Victorian music box and a melodeon. The walls of the entry hall are covered with 190-year-old wallpaper importer from France, a popular custom of the Colonial era.

The focal point of the house is a recreation of Dr.Wicks’ office including  a small surgical table and an apothecary, which contained the herbs and spices commonly used to treat patients.

“He took care of everything: broken bones, chest pains and diphtheria.”

Wicks practiced very basic medicine using rudimentary tools including pliers for dental work. He treated headaches with leeches and respiratory ailments with a muskrat pelt. Yet he was one of the first doctors to use a microscope.

The second floor houses a Victorian-era and a Colonial style bedroom.

A Colonial-style flower garden sits between the two museums. An herb garden is located outside the old kitchen. 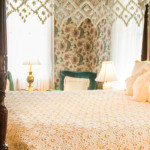 While all of our guestrooms have their own charm suitable for relaxation after the most wonderful day of adventures on Cape Cod’s, we recommend the Harriet Beecher Stowe room, the Theodore Roosevelt room or the Emily Dickinson room. These rooms feature comfortable king beds, fireplaces, jetted tubs and a relaxing stay before and after your day.