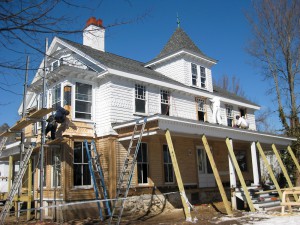 One of the many reasons why Bill and I became innkeepers is that we both enjoy collecting and restoring antiques. We wanted a home where we could display and share our collections and family heirlooms with others.  The Palmer House Inn is that dream come true. When Michael Jay, also a lover of period architecture, purchased number forty Main Street in Falmouth last spring, we took notice. This old house overlooks the Village Green and is about half a block from our antique bed and breakfast.

Since its construction in 1804, the house has been one of Falmouth’s gems. Most recently it has been known as the Tripp House, named for Dr. Edwin P. Tripp Jr. the Falmouth physician who moved there in 1941. While the doctor was living there the house also served as his medical office. Dr. Tripp retired in 1981. The house’s first inhabitant was Braddock Dimmock, who was the son of General Joseph Dimmock (known for standing up to the British during the War of 1812), a deacon at the nearby Congregational church and a member of the militia. It is said that he built the house because he wanted to live in close proximity to both the church and the Village Green,which served as the militia’s training ground. 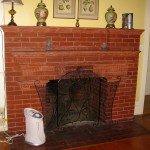 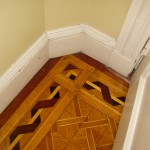 In recent years the lovely house had fallen into disrepair. At this time Mr Jay’s contractors have almost completely gutted the house and the adjacent carriage house. He plans to make it into four condominium units, divided equally between the two structures. Each condominium will have two bedrooms, two bathrooms, a kitchen, living room and dining room. Each one will measure roughly 1,600 square feet. The project is scheduled to be completed by June 2013. 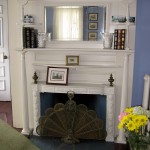 As one walks through the house, its historic details can be seen in the beams, framing wood and fireplaces. When the house was built logs were cut in half and used to frame the house. The bark is still on those logs. All of the lead paint on the exterior is being removed and the shingles will be completely replaced. In the  attic the beams are held together by wooden pegs. One unexpected project was the porches. They were sitting on an unstable rock foundation and the wood was completely rotted. It was beyond repair. At this time the roofs of the porches are being supported by two by fours while the carpenters replace the windows and siding. 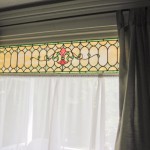 Originally, the house was constructed in the Federalist style, with a symmetrical appearance. In 1894 it was up-dated to look more like a Victorian. Several of the accompanying photos show details that were added at that time; the stained glass window, the peaked dormer, the charming  balusters, the paneled doors, the porches, also the beautiful inlay work in the flooring and of course the lovely white picket fence. 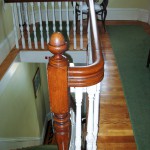 Along with its history, it is noted that the house is rumored to be haunted. In Dan Gordon and Gary Joseph’s book, “Cape Encounters“, Contemporary Cape Cod Ghost Stories, it is said,  “The specter of a stooped man in a flannel shirt walks the halls of number forty Main Street, Falmouth Cape Cod.”

While each of our rooms have their own antique charm, we suggest our Richard Henry Dana Room with nautical antiques, or the Edith Wharton Room located in the oldest section of the house and in the historic turret.