I grew up in Rocks Village, Massachusetts in the Deacon Phineas Nichols House. The house was built in 1740 and is a classic example of pre-revolutionary architecture. It has a central chimney with five fire places. The flooring is pumpkin pine and some of the boards are 24″ wide.  Before my parents purchased it, the house had served a store and school-house as well as a family home. When we lived there, all of the houses in the village dated from before the American revolution. The village had a small general store, a Firehouse that housed an ancient firetruck, a two room schoolhouse, a granite horse watering trough and the classic white Congregational Church. The village had sprung up around the Rocks Village Bridge that crosses the Merrimac River to West Newbury. The bridge had originally been a wooden covered bridge, however, in the 1930 the wooden structure was replaced with a steel one that opened to allow taller boats to continue up stream. My parents enjoyed antiques and after purchasing the house in 1945 they set out to furnish it with appropriate items. Many of our weekends were spent visiting antique shops, auctions and yard sales. 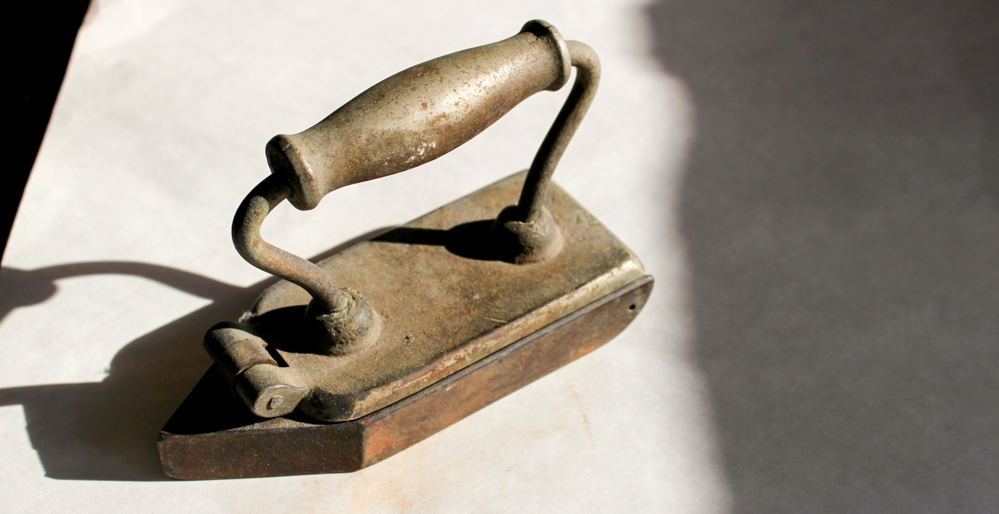 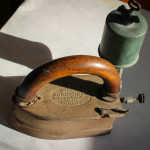 Dad worked for the New England Electric Company. He started as an electric meter reader right after he graduated from high school and worked his way up to sales manager in Essex County. In those days, the electric company was encouraging people to use electricity. They had stores in most mid-sized cities. The stores sold and serviced electric appliances. One of the promotions that was quite successful was that customers could trade in a used flatiron for a new and improved model. The company had expected the flatirons to be the used electric versions. However, it was not uncommon for an elderly lady to walk into the store with one of the pre-electricity versions.  The salesmen would bring the antique flatiron to Dad’s office. He would go out onto the sales floor, give the customer the new iron of her choice. Then he would write up a sales slip and pay for the iron himself. That evening he would arrive home with his prize and we would all admire his acquisition and decide where it would serve as a doorstop. That was how the collection started. 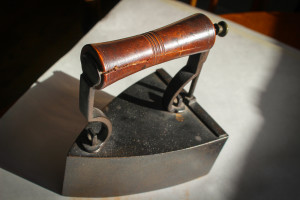 Flatiron with a heated brick inside and a cool wooden handle.

As a small child I can remember walking with my mother to Chip Germane’s house. Chip owned the fulling station on the Amesbury Line Road on the way into the city.  His brother also lived in the village and worked as the bridge tender and the janitor at the school. Chip’s housekeeper was an older woman named Dusty. My little sister would sleep in her carriage while Mom and Dusty would enjoy a cup of tea and chat. One sunny day as we arrived at Dusty’s kitchen door, we saw her ironing. She had the ironing board set-up in front of the black iron stove that she had stoked with firewood. There was an iron on the top of the stove and she was ironing a shirt with the another. When one iron would cool, she would switch it back to the stove top and pick up the other, wet her finger and rapidly touch it to the iron to see if it was hot enough. If she wanted to put the iron down in order to adjust the position of the shirt, she would place it on its holder that was on the end of the board. The handle of the iron would be quite hot, so she used a dish towel that had been folded several times to protect her hand. She also had a bowl of water on a table close by. Every once in a while she would lift up the iron, dip the fingers of her left hand into the bowl and snap the water on the shirt, then proceed to iron.  I sometimes think about how skilled she must have been to know just how hot the iron should be so that it did not singe the cloth. I guess that is one of those lost arts.

The iron collection has served us well at the Palmer House, decorating the fireplace and doorways. They are now being packed up and sent off to California to serve as doorstops in our daughter’s homes.

While all of our rooms have their own individual charm suitable for relaxation after the most wonderful day of adventures, we recommend the Harriet Beecher Stowe room, the Theodore Roosevelt room or the Emily Dickinson room. These rooms feature comfortable king beds, fireplaces, jetted tubs and a relaxing stay before and after your day.