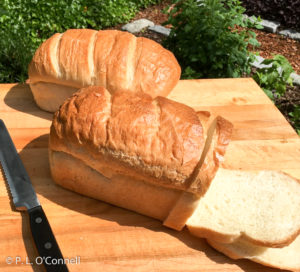 Cape Cod has a large Portuguese population. Most of the Portuguese immigrants came to America in the early years of the twentieth century and brought this Portuguese Sweet Bread recipe with them. Because most of them were farmers or fishermen by trade, Cape Cod was the ideal location to settle. The fishing grounds off Cape Cod’s coast are among the richest in the world. The land was inexpensive and abundant. It’s needless to say that these hard working, rugged individualists thrived and continue to thrive in New England.

In the days before air travel produce was brought to the US from Central and South America twelve months a year.  Falmouth became known as the Strawberry Capitol. The berries that these industrious folks grew in their fertile fields were abundant and sweet. The strawberry farmers prospered. Most of them were devout Roman Catholics. As they obtained some measure of wealth they wanted to thank God for their good fortune. The families pooled their resources and built the lovely Saint Anthony’s church in East Falmouth, close to their farms. It was during that time that Falmouth’s Strawberry Festival was started and continues to this day. Originally one of the local high school girls was elected to be the Strawberry Queen and she presided over  parade down Main Street and a Strawberry Shortcake feast under tents on Saint Barnabas church’s lawn.  The queen and the parade are gone but the feast lives on. It is scheduled each year on the 3rd Saturday in June. This year’s festival will be on Saturday June, 17 from 10am – 2pm.

For the above reasons Cape Cod has many wonderful Portuguese foods in our grocery stores, restaurants and bakeries. I have always enjoyed the sweet bread but the recipe below  is by far, my favorite. This recipe came to me from a Portuguese friend who was kind enough to share her grandmother’s secrets.

Just as an aside. When you are planning your visit to the Cape and if you want to experience some authentic local flavor, let me suggest, a lobster sandwich at the Quarterdeck Restaurant on Main Street in Falmouth. The Quarterdeck is just a seven minute walk from the Palmer House Inn and is owned by two local brothers.  Their lobster sandwich consists of the meat from one lobster, with just the right amount of mayonnaise. It’s served between two nice thick slices of toasted Portuguese bread. Now that is the taste of the true Cape Cod.

In a small bowel, mix the yeast into 1/2 cup of warm water plus the pinch of sugar. Add this mixture to the ingredients in the large bowl.

Add salt, all purpose flour and blend for 5 to 10 minutes. The dough will be gloppy and gooey.

Allow the dough to rise 45 minutes to 1 1/2 hours until it has doubled in size.

Keeping the dough in the same bowel and stir the dough down and allow it to rise again for 45 minutes to 1/2 hours or until it has doubled in size.

Grease 3 loaf pans.  Separate dough and place 1/3 into each pan.

Brush the tops with beaten egg.

Bake at 300 degrees for 45 to 55 minutes until a toothpick comes out clean.

While all of our guest rooms have their own charm suitable for relaxation after the most wonderful day exploring the workshops of our Cape Cod craftsmen, we recommend the Harriet Beecher Stowe room, the Theodore Roosevelt room or the Emily Dickinson room. These rooms feature comfortable king beds, fireplaces, jetted tubs and a relaxing stay before and after your day.