A Cape Cod Restaurant Review for the Cozy Quarterdeck Restaurant 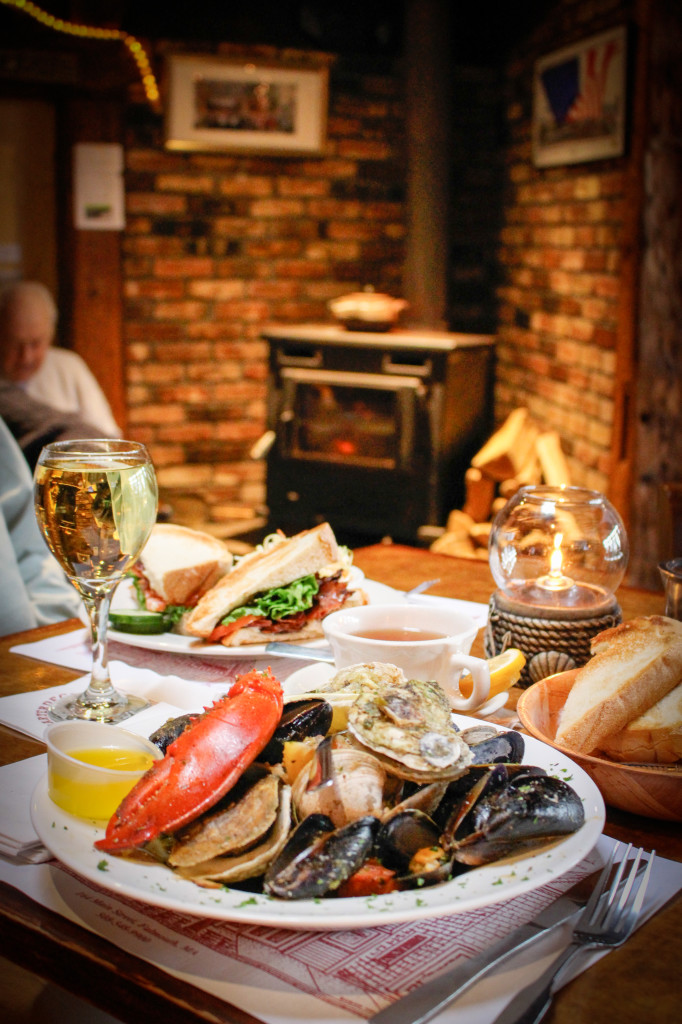 Wine and seafood by the fire.

Recently Bill and I decided to walk to Main Street to have lunch at the Quarterdeck. It was a Tuesday afternoon in January. The first thing that we noticed as the smiling hostess showed us to our seats – the place was hopping. What is the secret? How do they stay busy year round? The answer is simple: good food, reasonable prices, cheerful employees. It is a hang-out for locals but visitors like it too. The food is traditional New England style cooking. I would say that the specialty is seafood but they have a nice variety of steaks, burgers, chops and chicken, as well as several meatless offerings.

The Quarterdeck is located at 164 Main Street in Falmouth Village, just a seven minute walk from the Palmer House Inn. We were cozy and comfortable by the wood burning fireplace on this chilly afternoon. As a beverage I chose a hot cup of tea with lemon and Bill chose a glass of chardonnay. Bill decided to have the old classic, a  BLT on toasted Portuguese bread and I decided on one of my favorites, the Cape Cod Seafood Pot. For a seafood lover, this is the perfect choice. Although it is in the appetizer section of the menu, for me, it is all that I can eat. It is made by putting a lobster claw, muscles, clams, oysters, lemon wedges, shrimp and Portuguese sausage into a mesh bag. It is boiled in a seafood broth until the shellfish open. Then served in a bowl with the broth, drawn butter and toasted Portuguese bread. It’s like having a mini clam bake.

Some of the other traditional New England offerings  on the menu include: Fish & Chips, Fried Clams, Sweet Atlantic Sea Scallops, Day Boat Schrod and Lobster, boiled or baked stuffed. 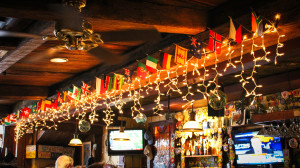 The Quarterdeck was opened in 1967. Much of the interior had been salvaged from MacDougall’s Boatyard in Falmouth Harbor. Some of the wood dates back to the 1600’s. Joe Downs, a local artist, built the interior to look like the below the deck of an old sailing ship. He also created the stain glass in the dining room. The stain glass windows that are located over the bar were once the front windows from a church in Maine. There are conflicting stories about whether the church was destroyed by fire or a hurricane but there they stand now being enjoyed by many a diner. The Jarvis brothers, Bill and Bobby, who own the Quarterdeck, along with two other Cape Cod restaurants, pride themselves with being ahead of the times when it comes to recycling. The long wall in the bar area displays the work of local artists. The display changes every few months.

The Quarterdeck is also the location for the Marine Corps Birthday each November. The Palmer House also celebrates our active military, police and firefighters with a B&B Military Discount. 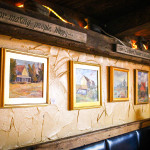 Local art on the wall.

At the conclusion of our meal, we walked back to the inn feeling quite satisfied after a pleasant midday break. 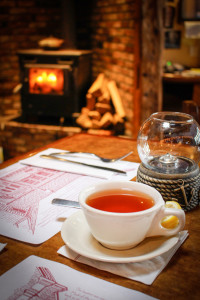 Tea by a warm stove.

The Quarterdeck is a short stroll from the Palmer House Inn. While all of our rooms have their own charm suitable for relaxation after the most wonderful day of dining on Cape Cod, we recommend the Harriet Beecher Stowe room, the Theodore Roosevelt room or the Emily Dickinson room. These rooms feature comfortable king beds, fireplaces, jetted tubs and a relaxing stay before and after your day.