Sunday August 12th was the 40th running of the Annual Falmouth Road Race.

Each year over ten thousand runners converge in the postage stamp sized village of Woods Hole to run this race. 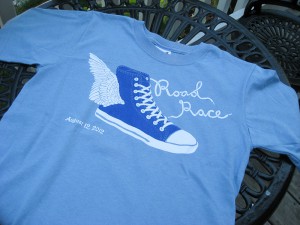 Our local t-shirt shop creates a unique design each year for the race. I just had to buy this one for our “almost” five year old grandson. He will be the only one in his San Diego kindergarten with this cool shirt.

The race started in 1972. It was the brain child of a colorful local character by the  name of Tommy Leonard. Tommy, an avid runner in his day, is 79 this year and no longer takes part in the race, however, he leads the way in a convertible while waving to his many fans. Tommy said, “It was a race born out of friendship. Those who were already friends, and those who would become friends. I guess I was a counter culture guy, but I believed back then, and still do,  in love and harmony. I wanted to do something that would make people feel good. No matter how bad I felt before a run, I always felt better after. It takes some effort, but it does give you a natural high.”

The race begins at the door of Captain Kidd’s restaurant in Woods Hole and ends on Grand Avenue in the Falmouth Heights section the town. A large part of its popularity is the beautiful winding roads that the runners travel. The race course goes through tree shrouded areas and along sandy beaches with beautiful views of Vineyard Sound and Martha’s Vineyard beyond. It then takes the runners past historic Nobska Lighthouse and around Falmouth Harbor. The race is a total of seven miles. It  takes place on the second weekend of August. There is almost always a guarantee that the weather will be hot and steamy. This year was no exception to that rule. The day started with a heavy down-pour of rain, however, by start time the sky was clear and the heat and humidity had settled in. 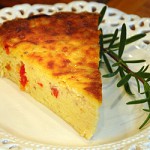 This weekend is very busy for the staff at the Palmer House Inn. Pat and Bill rise at 4:30 am to prepare the runners buffet breakfast that begins at 7:00am. We serve hot beverages, coffee, tea, and hot chocolate and an assortment of juices to start off. Two fruit cups were offered, one was mixed mellon the other mixed berries. Our assistant Ilona made delicious cranberry and blueberry scones. Corn muffins, assorted breads and a variety of bagels with cream cheese were also served. Several cereals were also offered. Bill made some of his wonderful crustless quiche with roasted red peppers and shitkei mushrooms. He also made some of his, melt-in-your-mouth, croissants. To keep with the slightly European theme, three types of cheese were part of the offering.  Pat made an eggbake casserole with fire roasted tomatoes and basil. As always scrambled eggs was one of the perennial favorites. To round out the buffet we had turkey sausages and bacon.

This year we had Bob Anderson and his staff stay with us in our Henry David Thoreau Cottage. Bob is the founder of “Runner’s World” magazine and its publisher for the past 18 years. They are in the process of filming a full length documentary. Bob, who is 64,  is celebrating 50 years of running and racing. His goal is to run in at least fifty races for at least 350 miles at better than 7 minutes per mile. For those of you who would be interested in following his travels, the journey is chronicled at: ALongRun.com