Cape Cod Sailing with the Captain and Crew of the Liberte 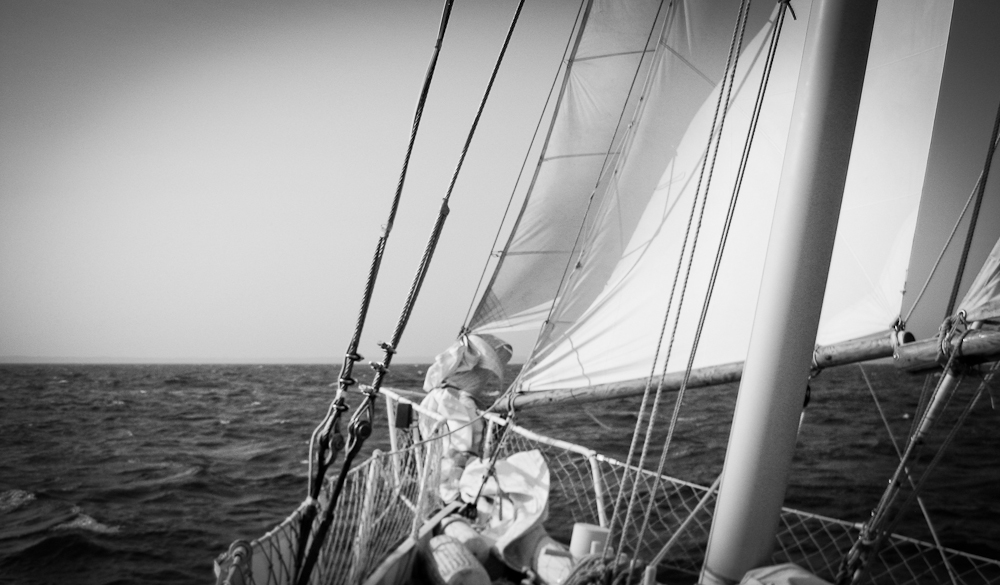 Reefed Jibs of the Liberte 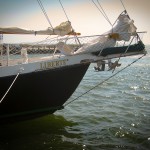 The seventy-four foot, three-masted schooner Liberte’ is docked in Falmouth Harbor each year from the fourth of July until Labor Day Weekend. On the very last day of her stay in Cape Cod last year, I decided to go out for a wonderful bit of Cape Cod sailing. The sky was blue and the wind was up. When I arrived on the dock, Captain Chris was working rapidly reefing the sails. He said that it was the best sailing day of the season. Sailing is a fantastic activity to do on Cape Cod.

As we dropped the lines and headed out of the harbor, the sails filled and we were off for an afternoon of splash and dash. I was glad that my hat was securely fastened under my chin. 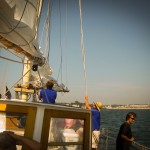 When Liberte’ leaves the dock the captain quickly makes sail depending upon the wind and tide. They may sail west to Woods Hole, on the way they sail past Nobska Lighthouse. Woods Hole has some wonderful old houses that can only be seen from the water. Beyond that are the Elizabeth Islands, the undeveloped emeralds of the New England coast line. If the wind takes them east they sail past the bluffs of Falmouth Heights and the beaches and nature sanctuary of Waquoit Bay. On the day of my sail we headed south in the direction of the waters near Oak bluffs and Martha’s Vineyard.

Captain Chris was born and raised in Woods Hole. He started sailing as a boy on a small pond. Later, he served as a deck hand on the New York Yacht Club summer cruises. He also sailed his families Cape Cod Knockabout in the Woods Hole channels. At the age of eighteen he earned his USCG captain’s license and the rest is history.

History of the Liberte and Cape Cod Sailing 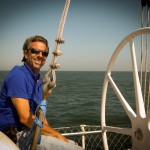 Captain of the Liberte

The Liberte’ is a custom-built steel hulled schooner that was designed for sailing comfort and fun. The hull was constructed at Little Creek, Norfolk, Virginia. She has a spoon-shaped bow and the interior, deck arrangements and sails were designed by Captain Chris and his wife Jane. The overall length is seventy-seven feet from the tip of the bow sprit to the stern, and the beam is eighteen feet.  There are three aluminum masts and the tallest is the one in the center and it is 64 feet in height. The booms are made of pine. The engine is a 135 horsepower diesel and the boat’s top speed is 8.5 knots. Captain Chris proudly boasts that they can carry enough fuel to reach Bermuda.

During the design process one of the most important requirements, was that they wanted a boat that was rigged so the schooner could be sailed by one person. Below decks there is over six feet of head room and the main salon is seventeen by seventeen feet. There is a large well equipped galley. There are two split cabins under the foredeck, a crew’s quarters forward and a large master stateroom aft. Liberte’ is United States Coast Guard certified for forty-five passengers.

The deck has plenty of open space. There are over sixty seats on the deck yet a wheelchair can easily be accommodated. In addition to offering sails on Cape Cod, this beautiful schooner can serve large buffets and intimate sit-down dinners for suitable for celebrations, corporate outings and numerous private outings.

The Liberte’ is docked in Falmouth Harbor each year from the fourth of July until Labor Day Weekend. During the fall, winter and spring months Liberte’ is docked on Spa creek in Annapolis, Maryland. For more information on sailing with this beautiful Cape Cod schooner visit their website at www.theliberte.com.

The Palmer House is located a short distance from Falmouth Harbor and the Liberte. If you are choosing a sailing themed holiday, we suggest staying in the Richard Henry Dana Room with its model sailing ship, the Herman Melville Room to peruse a copy of Moby Dick while admiring original artwork of New England sea-side towns, or the Emily Dickinson Room just because it has a jetted tub and romantic fireplace.