Part I: The Growing and Harvesting of Oysters on Cape Cod

Folks visit Cape Cod for a number of reasons. Some come because of our beautiful beaches with their warm sand and gentle waves. Others are looking for a quiet restful place to unwind. However, without a doubt one of the primary reasons for a visit to the Cape is our wonderfully fresh sea food.

Among the popular seafood choices are oysters an irregularly shaped mullusk or “crassostrea virginica”. Oysters are the most valuable crop legally grown in the US today. The oysters that are in the highest demand are grown and harvested right here on Cape Cod. It is said that, “like wine, no two oysters are the same.” Some are grown on farms while others grow in the wild and are plucked from their natural surroundings. Each oyster type has its unique flavor. The things that determine that flavor are its location, the salinity level of the water or in the case of farmed oysters, the growing methods. The temperature of the water, the water’s current and the mix of freshwater/saltwater mixture are also factors. Also, whether the oyster comes from the Cape Cod Bay side or the Martha’s Vineyard and Nantucket Sound side of the cape is also a factor. Even if the seed oysters come from the same hatchery, the conditions play a greater role in the flavor.

Some interesting facts about oysters are that they reduce when the water gets warmer. Also, they change gender one or more times during their lifetime.

This area has a number of oyster breeding grounds; Dennis, Osterville, Cotuit, Wellfleet Bay, Brewster and Barnstable Harbor.  Each of the oysters harvested from the above locations, has its own unique taste. In addition, the cape’s unpredictable weather can affect the crop from year to year.

When oysters are farmed, the seedlings can be purchased from a hatchery or they can be collected right on site. The growers set them up on what are called “hats”. I think that they got their name because they look like a very tall stove pipe hat. The surface of the hat is coated with a lyme and concrete mixture. The concrete is used so that the oysters will adhere to the hat and the lyme because the oysters use it to build their shells. 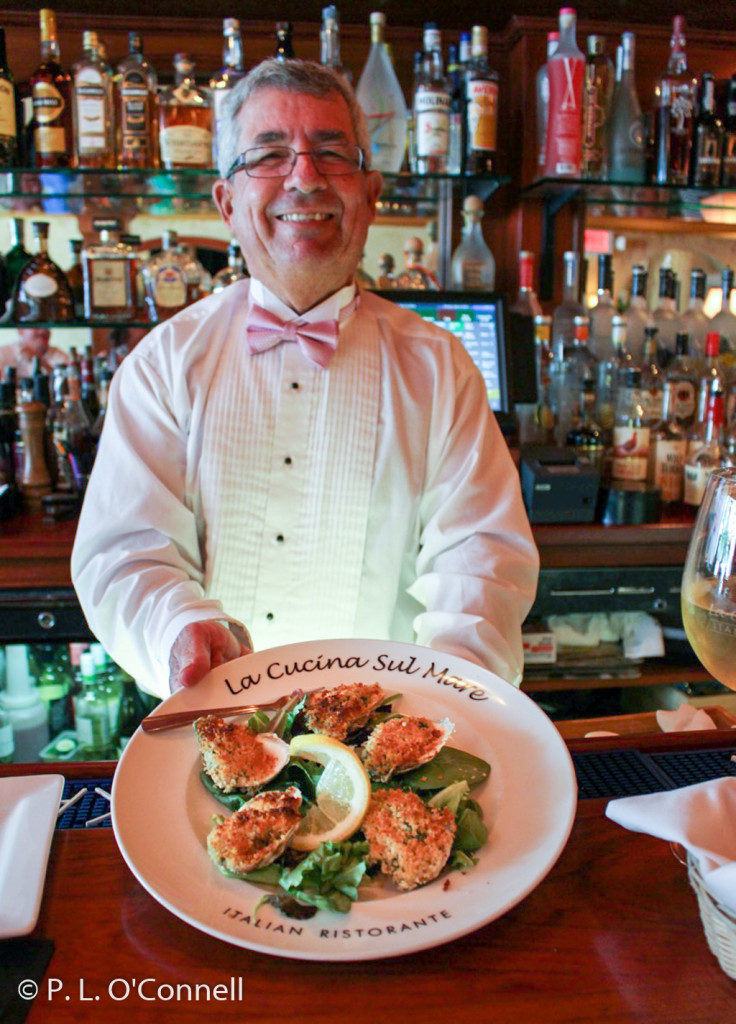 This is E.J. one of the fine bartenders at La Cucina sul Mare. He is serving one of our favorite appetizers, Oysters Rockefeller. I always enjoy their presentation.

Many people think that the larger oysters are the best, however, one can find an oyster with a large shell with little meat inside. The goal is to have a regulation sized oyster. That is one that measures three inches at its widest point. Also, the experts seek out the ones that have a deep curve in the belly of the shell. This indicates that it will be meaty and plump.

When harvesting oysters, farmers will usually set up a bin system. One bin each for ‘ready-for-sale”, “not quite ready”  the third for “tossing” and the last is designated as “no good”. Then some farmers sort even further. They sort by restaurant because they know what each chef prefers.

In Wellfleet there is a farm that is located next to a wild bed. The oysters taste the same. The difference is that the farmed or managed oysters have a much higher yield. That is because the oysters are grown in cages, in mesh bags or on trays. thus they are protected from predators. Also, the farmers guard against over crowding.

The six month oyster growing season is from May through October. Basically there are two methods of  growing oysters. One is called, “intertidal”, which is when the oysters can sometimes sit for hours at a time out of the water when the tide goes out. The second method is said to be “sub-tidal” which means that the oyster spends its entire life submerged in water.  Sub-tidal oysters tend to grow more rapidly because of their constant flow of water and thus, a food source. Many people believe that the deeper colder water gives the oyster a more desirable briny flavor. As for the intertidal variety that grow more slowly because they do not have continuous access to food during the time that they are out of the water. However, it is believed that the strong rays of the sun and more rapid fluctuations in air temperature, bake off harmful organisms on their shells. Farmers also have easy access to the crop with the sub-tidal variety.

The oyster farms are all on areas that are designated government grants. Some are as large as 34 acres. the “Cotuit Oyster Company” is family owned and one of the oldest. The farm dates back to 1857 and has five aqua culture grants. The seedlings are placed into floating bags where they take advantage of the nutrient rich surface water. The bags protect them from predators. When they reach the desired size they are planted on the bottom where they complete their live cycle before being harvested and sorted.

Because oysters are adaptive to their environment, they are capable of thriving in both high and low salinity waters. The average seawater salinity is 35 parts per million. However, in the waters of Dennis the salinity is 32 ppm. That means that the oysters grow a little slower than those grown in Wellfleet Harbor where the salt water mixes with fresh. There the salinity level is as low as 27 ppm. In that situation there is more algae in the water. Algae is the oysters’ favored food, therefor the Wellfleet oysters grow more rapidly. The Weelfleet oysters’ sweet aftertaste is said to be due to the its saltwater/freshwater habitat.

Another interesting fact about oysters is that they are known as, “filter feeders” which means that they draw seawater in, filter out and consume the algae and expel clean filtered water. One oyster can filter as much as 50 gallons of water a day. Oysters are good for the environment.

While all of the bedchambers at the Palmer House have their own romantic charm suitable for relaxation after the most wonderful day sampling Cape Cod’s oysters, we recommend the Harriet Beecher Stowe room, the Theodore Roosevelt room or the Emily Dickinson room. These rooms feature comfortable king beds, fireplaces, jetted tubs for a relaxing stay before and after your day.