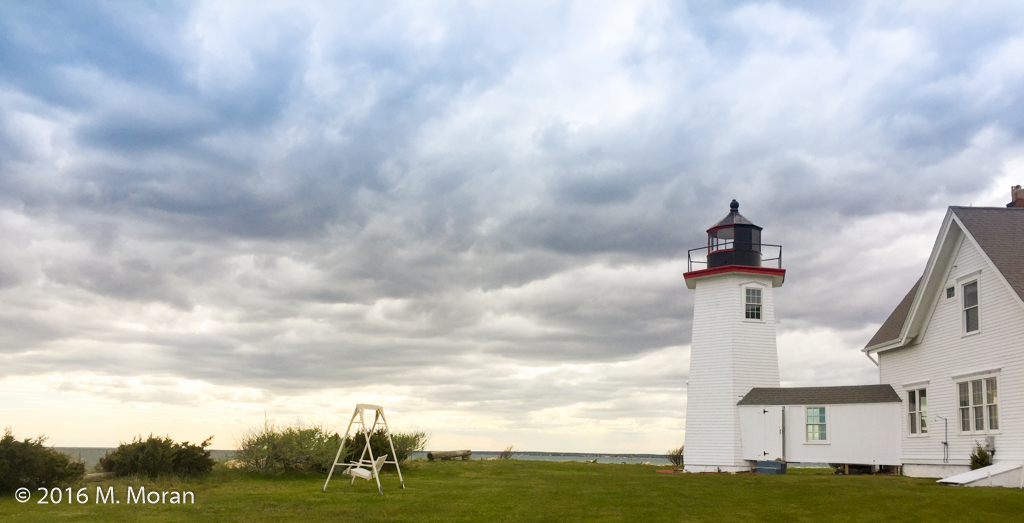 The Wing’s Neck Lighthouse, located in Pocasset, a small village in Bourne, Massachusetts, is a beautiful historic structure that dates back to 1849. Although the grounds are not open to the public, one can catch a glimpse of the lighthouse from the water. The lighthouse and keeper’s house is now a rental property where lighthouse lovers and Cape Cod vacationers can stay, explore and enjoy the unique structure on wonderfully secluded Wing’s Neck. 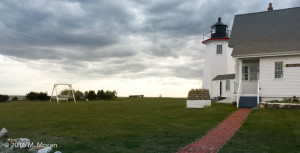 In the 19th century, the iron industry began to flourish in Bourne and the surrounding areas. Because of this boom, vessel traffic began to increase significantly on Buzzards Bay. The location of Wing’s Neck, a peninsula jutting out into the Bay, provided a great spot to install a lighthouse in order to aid navigation. In 1849, $3.500. was appropriated to build a lighthouse. Thus, the Wing’s Neck Light Station was established. The original lighthouse was a wooden hexagonal structure  built on top of the keeper’s house. The tower’s light was 38 feet above the ground and 50 feet above the water level. The first keeper of the light was a man by the name of Edward Doty Lawrence. He remained keeper until 1854 when he was removed from the position for apparently belonging to the wrong political party. His replacement, John Maxim stayed at the lighthouse for nearly 11 years but was killed in the battle of Gettysburg. After Maxim’s unfortunate death, Lawrence regained his former spot and continued his duties until 1887. However, during Lawrence’s tenure at Wing’s Neck, the keeper’s  house began to suffer immensely from the great weight of the tower pressing down on the roof. 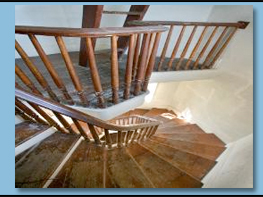 By the 1870’s the house was literally being crushed by the structure. The tower that can be seen today was built in 1890 to replace the failing architecture of the first light. This new lighthouse was built next to the new keeper’s home instead of on top. However, the replacement lighthouse did keep the same wooden hexagonal form, this time with a fieldstone foundation and with a height of 44 feet. More additions to the tower were made in 1902 when a 1,000 pound fog bell was added. The warning bell was rung every 30 seconds to warn captains of dangerous fog levels. When vessel travel began to once again significantly increase due to the opening of the Cape Cod Canal in 1914, the keeper’s house from Ned’s Point Light was moved to Wing’s Neck in 1923 to provide a home for an assistant keeper to take over the excess work that was accumulating. Today, the Ned’s Point keeper’s house remains standing and is a privately owned home. After the building of the Cleveland Ledge, the necessity of the Wing’s Neck Light began to dwindle. In 1945, the light was officially discontinued. The property was then sold privately in 1947 to Frank and Irene Flanagan, of Boston, Massachusetts. The Flanagan’s were known as a very musical family and it is said that the Von Trapp family spent some time at the Wing’s Neck property when it was owned by the Flanagan clan. Today, the Wing’s Neck lighthouse and keeper’s house remains as a private vacation rental. Also, remaining on the property is the original oil house from 1849 and the privately owned Ned’s Point keeper’s house that was originally built in the 1870’s. The surrounding land is now a monitoring area for the Cape Cod Canal, complete with a radar tower and closed circuit televisions. 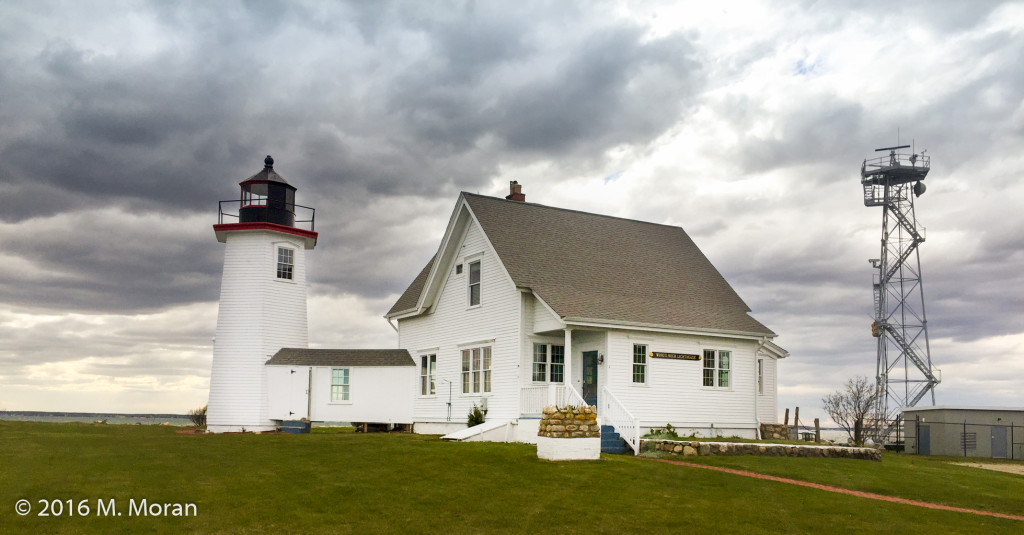 While all of the bedchambers at the Palmer House have their own romantic charm suitable for relaxation after the most wonderful day of exploring Cape Cod’s lighthouses, we recommend the Harriet Beecher Stowe room, the Theodore Roosevelt room or the Emily Dickinson room. These rooms feature comfortable king beds, fireplaces, jetted tubs for a relaxing stay before and after your day.