Sandy Neck, a small cottage community in Barnstable, Massachusetts, is home to one of Cape Cod’s most famous lighthouses, the Sandy Neck Light. Located near the entrance to Barnstable Harbor on the north coast of the Cape. Sandy Neck stretches six miles long and is only a half mile wide. At its closest point to the ocean sits the old lighthouse which was originally constructed in 1826 for only $3,500.00. The land was purchased for one dollar. Although the lighthouse and its six-room light tender’s house is presently privately owned and the grounds are not open to the public, this historic light can be viewed from the water, by boats traveling in and out of the harbor and also from some beaches in the vicinity. 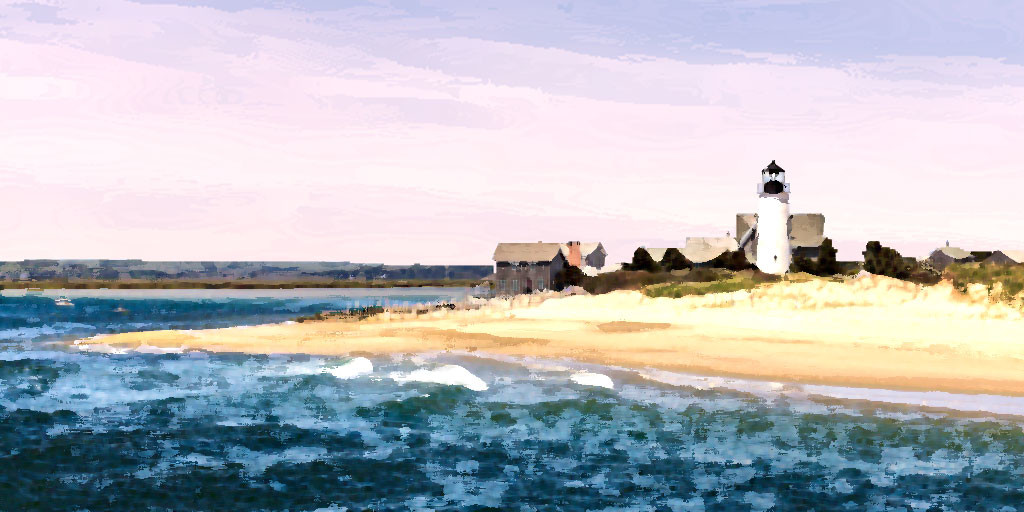 In the 19th century, when whaling was a thriving, successful industry here on Cape Cod, Sandy Neck was a major site for the processing of whale blubber so that it could be made into oil. To provide assistance in navigation and safety around this popular area, the Sandy Neck Lighthouse was built. The original structure was a 16 foot wooden tower that protruded from the roof of the keeper’s house. 40 feet above the high water level. The white light of the tower could be seen up to nine nautical miles away. Joseph Nickerson, the lighthouse’s first keeper, remained at his post for seven years with an annual wage of only $350.00.

Because of the severe weight that the light tower put on the house, Sandy Neck Light was fully replaced in 1857 to prevent severe damage to home itself. The replacement is a 48 foot tall brick structure that was located next to the keeper’s house, rather than on top of it. The structure remains that way to this day. Both the oil house and keeper’s house are also still standing. In 1931, the light was decommissioned and moved to a skeleton tower that was located closer to Sandy Neck’s edge.

After the light was moved, it was only lit seasonally from mid-April to mid-October. The skeleton tower light was then completely discontinued in 1952. The Sandy Neck Light remained dark until 2007. In 1950, the empty lighthouse and its property were sold to the Hinckley family. The Hinckley clan remains as the current owners and the grounds are managed by Kee Hinckley and Ken Morton. In 2007, nearly 80 years after being removed from the brick tower, Ken Morton and the Sandy Neck Restoration Committee put a replica lantern into the 1857 structure, restoring it to its original and unique Cape Cod beauty. The Sandy Neck Restoration Committee was created as part of the Cape Cod Chapter of the American Lighthouse Foundation in order to successfully recreate the once working tower. After completion by the Restoration Committee and Morton, the Sandy Neck Light was finally lit again just in time to celebrate its 150th birthday on Barnstable Harbor. Now labeled as a private aid for navigation, the Sandy Neck Light flashes its modern LED white light every six seconds and can still be seen up to nine nautical miles away.

While all of the bedchambers at the Palmer House have their own romantic charm suitable for relaxation after the most wonderful day of adventures on Cape Cod, we recommend the Harriet Beecher Stowe room, the Theodore Roosevelt room or the Emily Dickinson room. These rooms feature comfortable king beds, fireplaces, jetted tubs for a relaxing stay before and after your day.