First settled in 1818, Long Point is located in Provincetown, the furthest town east on Cape Cod. Long Point’s location, right off Provincetown Harbor, contributed to a growing fishing industry in the area. As the industry quickly grew, so did the population, and consequently, so did water traffic coming and going from the busy fishing port. It was eventually decided that a lighthouse located at the harbor’s entrance at Long Point, would prove beneficial to navigation. 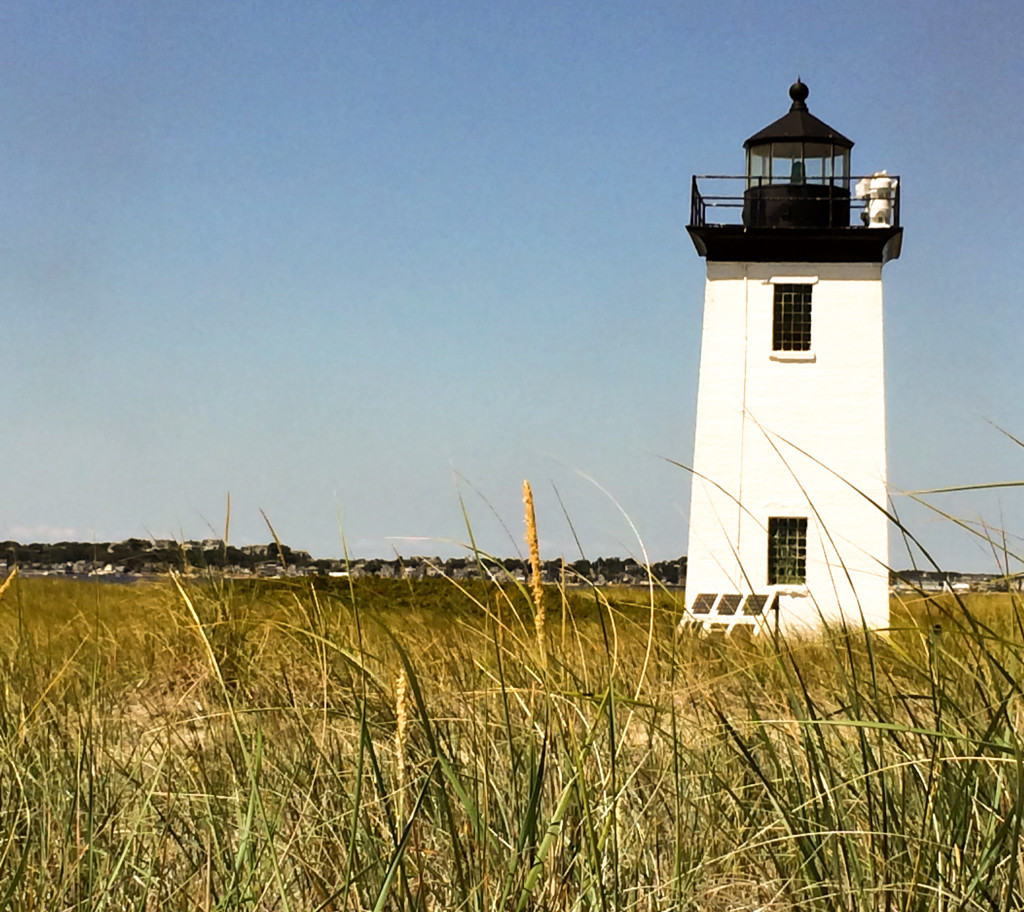 In 1826, the first Long Point Light was lit. The light was simply a lantern, sitting 35 feet above water level, which rested on top of a keeper’s dwelling. Its fixed white light could be seen up to thirteen nautical miles away and helped to bring mariners safely into Provincetown Harbor. In 1830, Long Point Light was used as a school building. There were about 60 students enrolled in classes. However, after the Civil War, population in Long Point greatly diminished, which ending the necessity of the make-shift school. The population dwindled down so much that most of the houses were actually floated on barges over to the west end of Provincetown.

Although Long Point was no longer a flourishing fishing community, upkeep on the lighthouse continued and in 1856 a sixth-order Fresnel lens was installed in the bright lantern. However, in 1873, during a routine inspection, it was decided that the lighthouse and keeper’s house should be completely rebuilt. The inspectors feared that an angry storm would wash the old lighthouse away. Thus, $13,000. was appropriated for the project and by 1875 the original Long Point Light was replaced by a 38-foot brick structure, containing a fifth-order Fresnel lens and sporting a fixed bright white light. While construction was under way, a brand new 1 ½ story house was built for a light keeper, and a fog bell, weighing in at 1,200 pounds, was also installed with its own building. In 1904, another building was built, this time for oil. Making Long Point Light a four building property.

As time and technology have advanced, Long Point Light has undergone many upgrades. The light was automated in 1952 along with the installation of a new 300 mm modern optic to replace the outdated Fresnel lens. Thirty years later, and after many more advances in technology, Long Point Light had solar panels installed. The light station did suffer a loss at that time, both the keeper’s house and fog signal building were destroyed in 1982 during the installation of the solar panels.

Today, the Long Point Lighthouse remains a navigational aid to the U.S. Coast Guard. The Cape Cod Chapter of the American Lighthouse Foundation controls the restoration and maintenance of the station. The grounds of the Lighthouse are open to the public, accessible by a shuttle boat that runs regularly in the summer. Although the lighthouse itself is private, one can still take a look from the outside and watch the stationary green light shine off into the open sea. For more information on the History of Long Point and areas surrounding, be sure to check out the exhibit in the Provincetown Heritage Museum while visiting the town!

Proof of a dedicated light keeper : One of Long Point’s keepers, Thomas L. Chase, once rang the fog bell by hand for a consecutive nine hours in intervals of thirty seconds when the mechanism controlling the ringing tragically broke during a patch of dense fog that was passing through the area.

While all of the bedchambers at the Palmer House have their own romantic charm suitable for relaxation after the most wonderful day of adventures on Cape Cod, we recommend the Harriet Beecher Stowe room, the Theodore Roosevelt room or the Emily Dickinson room. These rooms feature comfortable king beds, fireplaces, jetted tubs for a relaxing stay before and after your day.