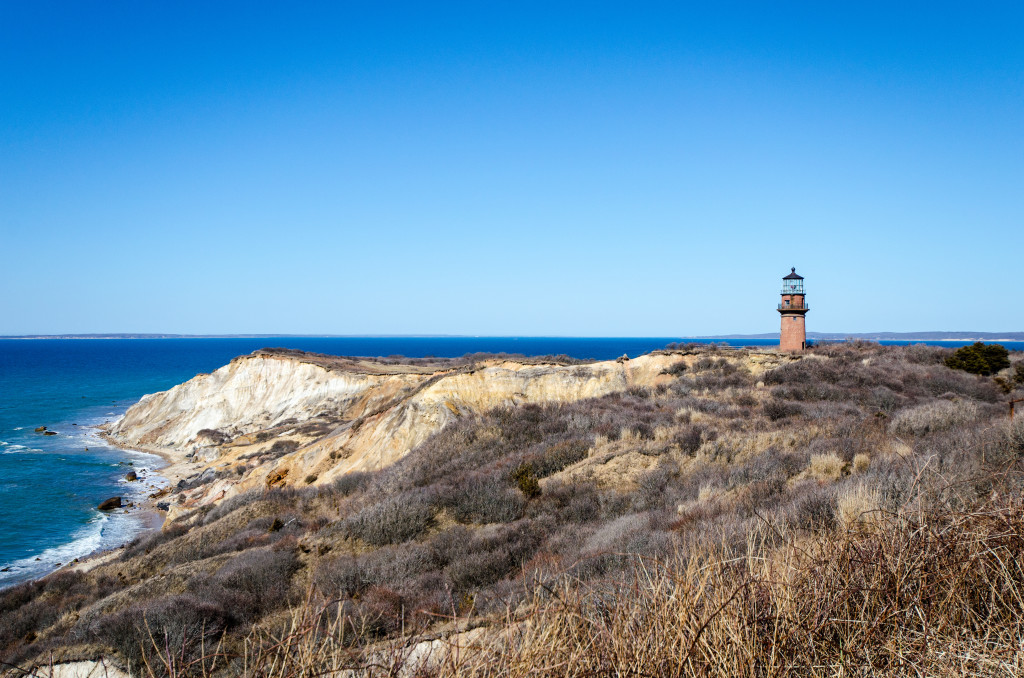 In the late 18th century, the whaling industry was beginning to flourish for both Martha’s Vineyard and Nantucket islands. Subsequently, traffic on the waters surrounding the islands began to rapidly increase. Also there was an increasing number of devastating shipwrecks on and around the waters of Nantucket Sound. In 1796, Congress was approached with the proposal to building a light house at Gay Head, an area of Martha’s Vineyard now named Aquinnah. The light would protect the waters between the clay cliffs of Gay Head and the Elizabeth Islands. This area has extremely dangerous underwater shoals and rock formations that are a constant threat to the safe travel of whaling vessels and their crews. The island was granted $570 for the construction of a light, and in 1799 two acres of land were given to house the first lighthouse on Martha’s Vineyard – the Gay Head Light.

Interesting Fact: Although the town of Gay Head has changed its name to Aquinnah, Gay Head Light will remain officially recognized as such due to its 1987 placement on the National Register of Historic Places. 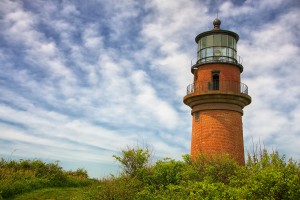 As years passed, the clay cliffs slowly eroded and the Gay Head tower seemed to be falling apart at the same pace. In 1852 the Federal Lighthouse Board requested a brand new, better tower for the “lighthouse that is second to none on the East Coast.” The following year, $13,000 was appropriated for not only the tower itself, but for a better light apparatus as well. The sum of $30,000 was added to the total in 1854. This time for a major upgrade, a first-order Fresnel lens. Caleb King, a Boston man, would construct the new brick lighthouse as well as a brick keeper’s home.

The light tower stood 52 feet tall and was conical in shape. The bricks themselves were harvested directly from the clay of the Gay Head cliffs where the light resides. Inside the durable brick lighthouse, a twelve-foot tall, whale oil-fired, first-order Fresnel lens was installed. Weighing in at one and a half tons, the lens consisted of 1008 crystal prisms that produced a bright flash every ten seconds. Gay Head Light was one of the first lighthouses ever to receive a first-order Fresnel lens. This one in particular, won first prize in the 1855 Paris Exhibition of Industry.

Because of the light’s rarity, it caused an influx of publicity and tourism for the island. To stay distinguished and unique from any other light on the entire East Coast, the Gay Head Light changed its pattern in 1874. The light now produced three white flashes followed by one red flash.

Interesting Fact: In 1902, the brick keeper’s dwelling was demolished due to a series of unexplained illnesses and deaths that seemed to continue among the occupants of the house. It was replaced by a small wooden cottage.

The mid-1900s began a period of change for the Gay Head Light Station. In 1952, the outdated Fresnel lens was replaced by a ‘high intensity’ electric beacon. The crystal lens would stay safe, however, with all its weight and glory being donated to the Martha’s Vineyard Museum, for the public’s viewing. Only four years later, in 1956, Gay Head Light would be completely automated which inevitably caused the removal of the keeper’s house from its property.

Thirty years later, the lighthouse was once again in peril; this time from demolition due to lack of Congressional funding for the Coast Guard. Being one of three lighthouses in danger of destruction. The Vineyard Environmental Research Institute formed a federal petition, which led to congressional testimony. The petition had the support of both Senator Ted Kennedy and Congressman Gerry Studds.

In the end, all three Martha’s Vineyard lighthouses were saved and leased out by the Coast Guard to the Research Institute for 35 years. The lease gave the Institute full control over all three light stations. Over the next year, proceeds from community fundraising were given to restore the Gay Head Light and its grounds. In 1986, Gay Head Light Station was open to the public for the first time in thirty years. Once open, lighthouse tours and sunset gatherings were offered to visitors. In 1994, the Vineyard Environmental Research Institute transferred its license over to the Martha’s Vineyard Museum. Ownership was then turned to the town of Aquinnah. Today, Gay Head Light is a current aid to navigation for the Coast Guard and is still managed by the Martha’s Vineyard Museum.

Recent Changes: In May of 2014, $3.5 million was raised in order to once again move the lighthouse away from the eroding cliffs. The move extended the survival of the tower for an estimated 150 years. It was re-lit on August 11, 2015. Today, picturesque Gay Head Light is open to the public for tours through the Martha’s Vineyard Museum.

While all of the bedchambers at the Palmer House have their own romantic charm suitable for relaxation after the most wonderful day of adventures sampling Cape Cod’s finest sights, we recommend the Harriet Beecher Stowe room, the Theodore Roosevelt room or the Emily Dickinson room. These rooms feature comfortable king beds, fireplaces, jetted tubs for a relaxing stay before and after your day.

Mary Moran is a Falmouth native and knowledgeable about Cape Cod. In addition to writing for the Palmer House Inn, she’s also frequently at the inn and available  to answer quest’s questions. She enjoys reading, hiking, and spending time exploring Falmouth’s coastal waterways.