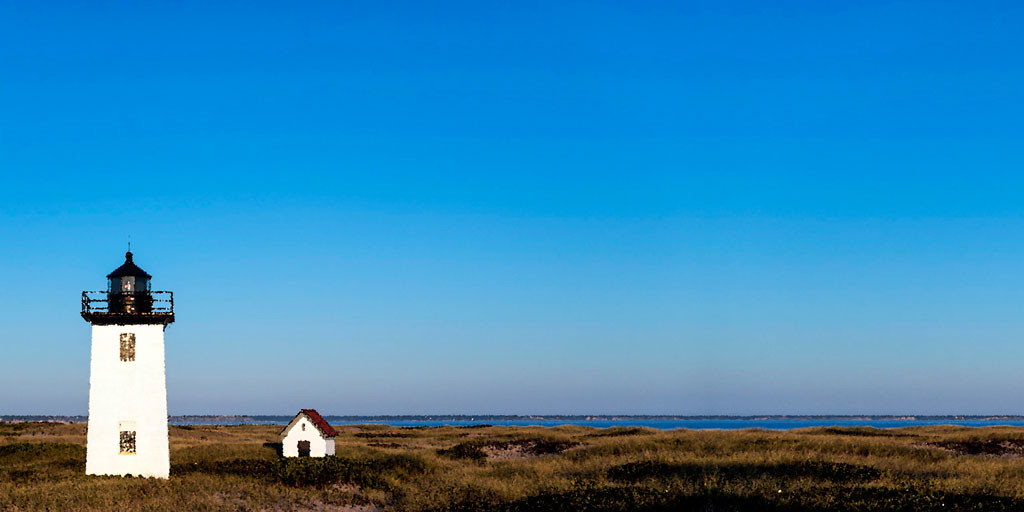 From the 1820’s to the 1860’s, two great lighthouses were the only navigational aids warning ships passing by of the strong and dangerous waters surrounding the outer most town of Cape Cod; Provincetown. Although the two standing lighthouse’s (Race Point and Long Point) proved to be decent aids for navigating the waters, it was decided that a third lighthouse was needed to protect and warn travelers of danger at the southern most entrance to Provincetown Harbor. Wood End Light originally began as a white, pyramid-shaped day beacon in 1864. It wasn’t until 1872 that Congress finally appropriated funds for a proper lighthouse to be built. The sum of $15,000 was given to create the 38-foot brick tower. A fourth-order Fresnel lens was installed giving off a flashing red light every fifteen seconds, shining about 48 feet above the angry water. By November of the same year, Wood End Light officially went into service. The lighthouse, to this day, is a tall brown structure that stands steadily in its concrete foundation.

In addition, alongside the lighthouse a modest keeper’s house was built. It was located about fifty feet away from the tower itself. A man by the name of Thomas Lowe would soon move into the home as the first keeper of the light and it was there he began a long, exhausting, and often dangerous, 25 year reign at Wood End.

Shipwrecks and boating accidents would still occur no matter how many lighthouses surrounded the waters. Lowe took his duties whole-heartedly and was often seen running to the waters to save the frightened passengers from the vessels that were in trouble. Because of the dangers of shipwreck that inevitably occurred, life-saving stations were built near the lighthouses themselves. Wood End Light got its life-saving station in 1896, while Race Point light had one put on its property 24 years earlier. The addition of the saving station was not the only upgrade Wood End Light would get in 1896. A new keeper’s house, storage shed, and oil house for kerosene were also added on the land to help house and protect equipment for the light.

Throughout the years, more upgrades would be made to Wood End Light, including the extremely useful fog bell and bell tower that were added to the property in 1902. By 1961, the light had been automated, leaving no need for the other buildings to remain. All of them were subsequently destroyed; except for the oil house. A more modern optic also replaced the Fresnel lens in 1961 and only twenty years later, in 1981, a major change was made to Wood End Light,  converting the tower to solar power. Now the light gives off a bright red flash every 10 seconds and the foghorn is set to go off in 30 second intervals. Today, Wood End Light still stands, and is currently an active U.S. Coast Guard aid. The Cape Cod Chapter of the American Lighthouse Foundation is licensed to maintain and restore the property. The property remains off limits to the public but can be viewed from excursion boats setting sail out of the harbor. To walk to the Wood End Light from the center of town is a strenuous hour long walk through an unpredictable and tricky breakwater. Making the trek is not recommended.

While all of the bedchambers at the Palmer House have their own romantic charm suitable for relaxation after the most wonderful day of sightseeing on Cape Cod, we recommend the Harriet Beecher Stowe room, the Theodore Roosevelt room or the Emily Dickinson room. These rooms feature comfortable king beds, fireplaces, jetted tubs for a relaxing stay before and after your day.

The health and safety of our guests and staff are our top priority, and we’ve made some important changes to prepare for your visit. Please review the most recent executive order on restricted entry into MA before traveling. We hope to welcome you to Falmouth soon!