The first Nobska lighthouse was built in 1829, because Woods Hole’s deep harbor had attracted a substantial whaling fleet and many steam vessels passed by while crossing through Vineyard Sound. During the year that it was built over 10,000 vessels passed the light.

The second lighthouse was built on the site in 1876. It is a 40 foot tower made of cast iron and lined with brick. It has a fifth order Fresnel lens. In 1888 the lens was upgraded to a fourth-order lens and at that time a red sector was added to warn boaters of the hazardous L’Hommedieu and Hedge shoals.

In 1985 the light was automated and the lighthouse keepers were no longer necessary. Now the Commander of the Coast Guard Sector Southern New England resides in the lighthouse tenders former quarters.

Nobska will be open to the public six more times during 2012.

Nautical Connections at the Bed & Breakfast 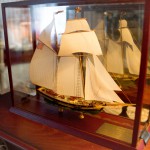 If you’re keen on a nautical theme to your lighthouse holiday our Herman Melville Room is cozy and decorated with original drawings of local whaling ships. The Richard Henry Dana Room features more of these beautiful drawings and boasts a king bed and jetted tub… for those who prefer a good soak at the end of a day sightseeing.