The beautiful Cape Cod lighthouse, Cleveland Ledge Light, is rare example of Art Modern architecture, has been sold to Sandy Boyd, a California businessman who owns a dozen coffeehouses on the west coast. The lighthouse stands high in Buzzards Bay, approximately two miles due west of Old Silver beach in North Falmouth. Boyd hopes to restore it as a residence. 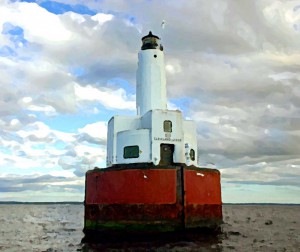 In 1989 the United States Coast Guard  automated the light, which meant that it no longer needed its eight man crew. Since that time the interior of the structure has deteriorated significantly.

The lighthouse is seventy feet tall and made of steel and concrete. It flashes a white light every ten seconds and the two second foghorn blasts every fifteen seconds, in foul weather. In 2010 the lighthouse was put up for auction by the United States General Services Administration as part of the National Lighthouse Preservation Act of 2000. Mr Boyd recently bought it for $190,000 and plans to restore it to its original condition. At the present time he is searching for the original plans, old photos,and biographies of the crews that served on the lighthouse. He hopes to make it a living museum. His goal would be to use it as a fundraising destination, where people could go for an evening.

This is the first lighthouse in Massachusetts that has been sold to a private party. As conditions of the sale, the lighthouse must remain an aid to navigation and the historic structure must be preserved.

The structure is much larger than it appears from Old Silver Beach. It has four stories, four bedrooms, one bathroom with a bathtub, subway tiles and the original light fixtures, a living room with a wood burning stove, a galley kitchen with pantry and an office. Above all that is a spiral staircase that leads up into the lighthouse tower.  The tower has two landings that are large enough to accommodate comfortable furniture and lighting. There is also a basement that houses  diesel engines and cisterns. It has an iron caisson foundation that is 52 feet high and it is fifty-two feet in diameter and sits in twenty-one feet of water. The caisson foundation was made in New London, CT in 1940 and was towed to its home by commercial tugs, where it was sunk into the ledge. It took nineteen hours for the tugs to make the journey. It is the only Art Moderne lighthouse of its kind in New England. It sits atop Cleveland Ledge on the eastern side of the southern entrance to the channel that leads to the Cape Cod Canal. It was the last lighthouse to be commissioned in New England in 1943. At the time of its commissioning, it held a fourth-order fresnel lens.

Cleveland Ledge lighthouse was named after President Grover Cleveland, who had a home in Bourne, just north of Falmouth. Cleveland enjoyed fishing in the area. This home was the first “summer White House” and was called Gray Gables. Gray Gables was destroyed by fire in 1974.

For more information and photos of this Cape Cod lighthouse go to: www.capenews.net

While all of our rooms have their own individual charm suitable for relaxation after the most wonderful day of adventures exploring the historic lighthouses of Cape Cod, we recommend the Harriet Beecher Stowe room, the Theodore Roosevelt room or the Emily Dickinson room. These rooms feature comfortable king beds, fireplaces, jetted tubs and a relaxing stay before and after your day.