Before she was 12 the “America the Beautiful” author, Katherine Lee Bates, wrote her last will and testament. 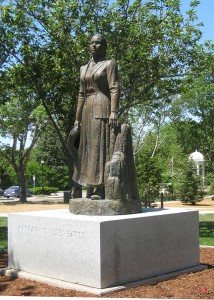 Deeply affected by the death of her father shortly after her birth, She believed in leaving nothing to chance. She bequeathed all her worldly possessions, including her dolls and toys,to a close friend with the hope that she would give them to poor Indians and her garments to her Mother.

Bates was born in Falmouth on Aug. 12, 1859, in a house less than a block from The Palmer House. Her father was the pastor of the Congregational Church. She lived in the town for the first 11 years of her life.Educated at Wellesley College, she became a professor and eventually head of the college’s English literature department. Although best known for her beloved poem ” America the Beautiful,” she also wrote 32 volumes of stories, poems and essays. The author is buried at Oak Grove Cemetery in Falmouth.

Room One at the Palmer House is called the Katherine Lee Bates Room. 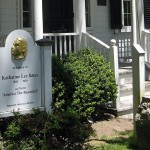 The Katherine Lee Bates exhibit can be seen at Falmouth’s Museums on the Green.