**We are no longer offering this event at Palmer House – please check out other things to do in Falmouth here.** 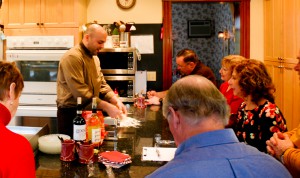 Food from Emilia Romagna is very different from the foods from southern Italy and from traditional Italian-American food. Fabio explained that very little garlic is used and when it is used it is perhaps put into olive oil as a flavoring, and then discarded. Northern Italians use much more onion and the meat of choice is pork. They use much less tomato, more potatoes and butter is the fat of choice over olive oil. All of the wines in the restaurant are Italian as are the cured meats and cheeses.

Osteria La Civetta get all of their fresh fish from “The Clam Man” fish market on Gifford Street in Falmouth and most of the produce from the local Farmer’s Market. All of the pasta is prepared daily around noon. Fabio prefers to work on a wooden table because, “The wood is alive”.

During the class, he first mixed the pasta then allowed it to sit for about 20 minutes while he showed us how to prepare the bolognese sauce. When he returned to the dough he cut off a section and began passing it through the pasta roller. Each time he passed it through, he folded it and adjusted the machine and rolled it again and again. He explained that this process makes the dough strong and smooth. When he decided that it was thin enough, he laughed and said, “In Bologna, they say that when you can see through the dough to San Luca, the highest church in the city, that’s the perfect thickness for tagliatelle. 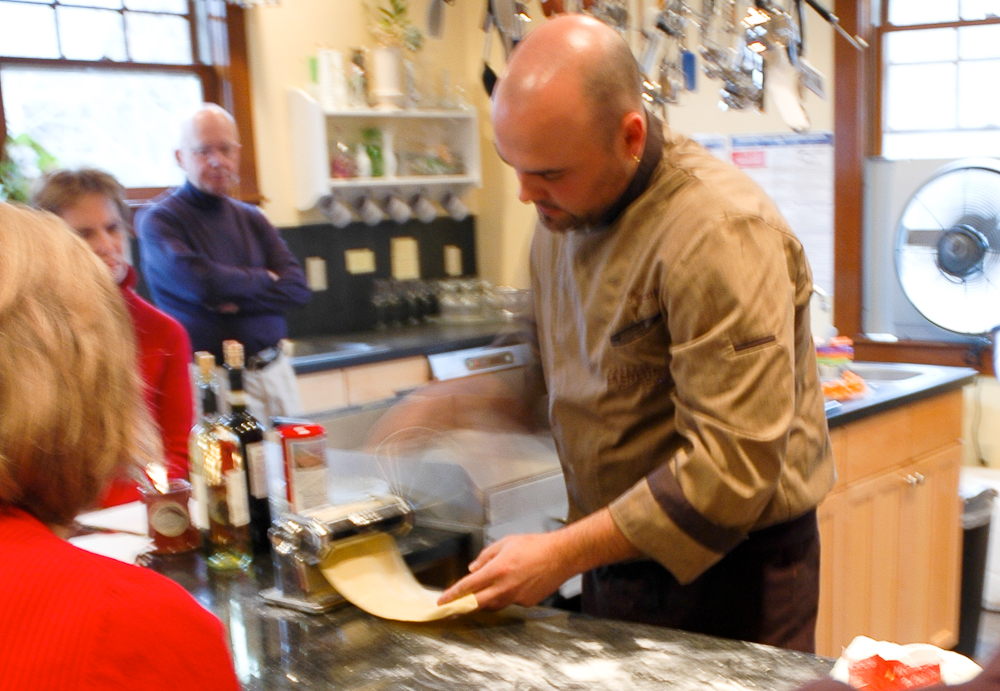 Rolling out the pasta.

During the class chef Pozzati taught us to form tortellini and tortelloni, its larger form. It was stuffed with ricotta and spinach. Later when we sampled the prepared dishes we were able to sample the chosen wines that he had brought along. A good time was had by all. 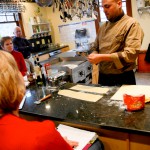 Osteria La Civetta opened on Main Street in Falmouth just five years ago and soon became a popular meeting place for locals and visitors alike. An osteria is a kind of Italian restaurant with a bustling atmosphere. The volume is loud and the tables are nestled close together. One can also buy groceries such as cheeses, nuts, oils and the like. The restaurant’s symbol is, la civetta, a small owl that symbolizes good luck in the Emilia Romagna region of Italy. Emilia Romagna is a triangular shaped part of Italy that is located in the north eastern part of the country. Some of its cities are; Reggio, Parma, Modena, and the best known Bologna, which is where bolonaise sauce was developed. It is also where balsamic vinegar was developed and where Parmigiano-Reggiano and Prosciutto originated. 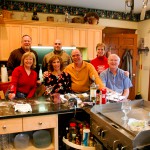 The owners of Osteria La Civetta are an energetic young couple, Sara Toselli and her husband Andre Poggi. They are also from Emilia Romagna as is Chef Pozzati. When designing the restaurant’s interior the goal was to make it look like an authentic old world osteria. All of the tables, chairs, dishes, lamps, art work, vintage advertising, and the metal grill-work were shipped from Italy. Even the handmade menu covers are made from Italian wall paper and feature fruits, vegetables, nuts and wine bottles.  One Palmer House guest said after returning to the Inn from a memorable meal, ” It was just like stepping off the Cape Cod sidewalk and into Northern Italy.”

We are looking forward to Chef Pozzatti  being with us three more times this season. Join us for more Cape Cod Cooking Getaways.