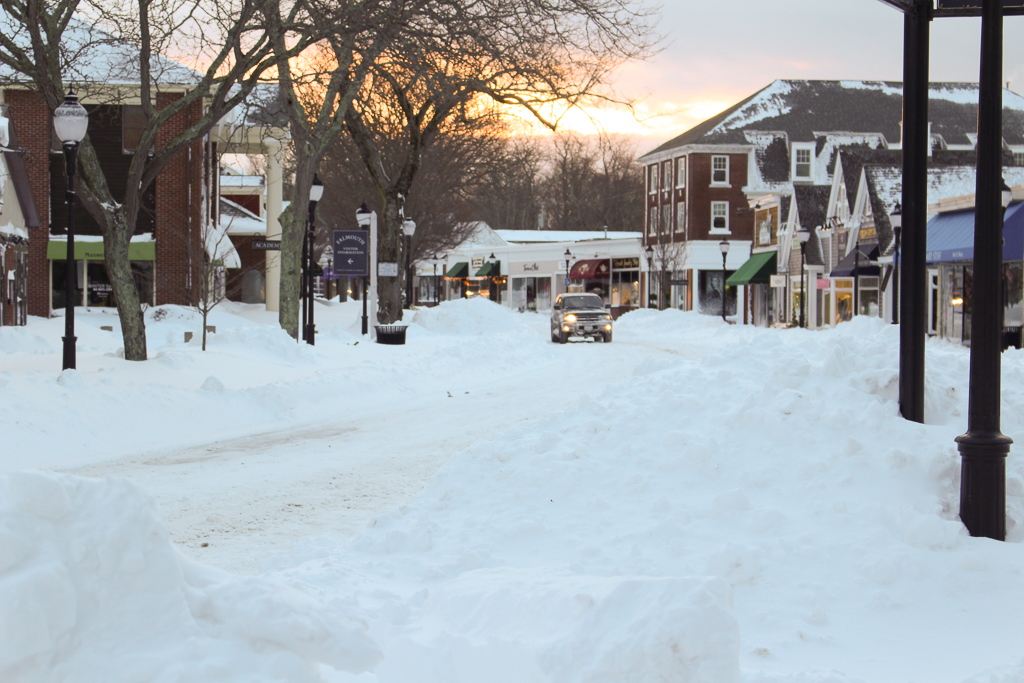 The National Weather Service predicted a “potentially historic blizzard” to hit eastern Massachusetts, the Cape and Islands starting on Monday night and continuing into Wednesday.

On Monday I decided to do a narrative of the blizzard of 2015’s progress at the Palmer house Inn and in Falmouth Village.

The area was under a Blizzard Watch and the National Weather Service predicted that some areas may get as much as two feet of snow. The service said, “To put that into perspective, that is more than half of what Boston gets in an average winter.”

“Travel may become impossible and life threatening across the entire region. This has the potential to be a historic storm.”

Monday night through Tuesday afternoon was predicted to be the worst of the storm. Our area could experience white-out conditions during the height of the blizzard.

The snow was forecast to be wet and heavy and could cause power outages due to downed trees and electric lines.

Along with the heavy snow we are having damaging winds with gusts 60-70 mph. The prediction was that there would be moderate coastal flooding. Fortunately the Palmer House Inn is 18′ above sea level so we will not have a problem in that department.

Pete Bouchard who is with Channel 7 news in Boston said, ” Fifteen  to twenty-four inches of snow across the entire region is likely except for the Cape, which will get closer to a foot of snow.”

Bouchard said there could be major flight delays and cancellations and suggested people leave on Sunday or early on Monday if possible.

“Don’t take this one lightly. Tempests like this only come around once in a while. Heed the advice of the authorities and chill out at home,” said Bouchard.

It is now 11:30 am on Monday January, 26th. I have just come back from a stroll to Main Street and the first flakes are beginning to fall.

By 2:00 pm on the 26th. Governor Baker declared eastern Massachusetts to be in a state of emergency and he issued a travel ban to begin at midnight. There was only about an inch of snow on the ground at that time, however, it was beginning to accumulate rapidly.

At 5:00 pm or sundown the snow depth was only 3″ when we went out to dinner, however, when we walked out of Anejo at 7:00 pm there was 6″ on the sidewalk. The forecasted high winds had not started, however, the snow is wet and heavy. That is one of the disadvantages of living close to the ocean. Our plow man is lined up to come in the morning. All is well.

After we were snugly settled in our Owners’ Quarters at the Palmer House Inn the wind began to blow with great gusts. It continued to blow through the night. At 5:30 am, I was awakened to the sound of honking geese. During a major storm like this one the Canada Geese gather in open fields and at dawn they sound the alarm. They were in a nearby school playground. We had over a foot of snow at that time and the prediction is that the storm will linger into tomorrow. It is difficult to tell how much snow has fallen because of the drifting.

The news channels say that there are over  10,000 households without electric power on Cape Cod. The towns include Provincetown and the entire island of Nantucket. We are lucky, we still have electricity.

At 4:00 pm, the snow was falling at a rate of 2″ per hour and the wind gusts had increased. The snow has been drifting in fanciful forms and the forecasters say that it will continue throughout the night. I wanted to go out to take some photos on Main Street but it was too dangerous. The Governor’s travel ban was not lifted until 12:00 am.

The wind gusts and snow stopped some time during the night, then the temperature dropped. When I went outside to take photos at 7:00 am, the temperature was 13 degrees and the wind was blowing steadily out of the west. Our electricity was uninterrupted. It is difficult to tell because of the drifting but my best guess is that we got about 30″ of snow.

All of the stores on Main Street were closed yesterday. That is the first time in the ten years that we have owned the Palmer House Inn. As I walked down the street people were beginning to dig out. The town was coming alive.  Two more storms are predicted for Thursday and Sunday of this week.

This has been quite an adventure and it is only January.